Finally after ten years since graduating I have reached the point where i felt the need to take on a Masters Degree in Fine Art. This is a full year course from September till September so it is quite an intensive art experience that leaves little time for any writing for my blog. That isn't to say I wont write more soon as I do intend to use the blog as a tool to explore and document themes and theories relevant to my own practice.
Posted by tom calnan at 00:51 No comments:

IF is not the first Arts festival for Milton Keynes but it has certainly been my favourite. With a really great line up of events for all tastes I’m sure that anyone who attended would have found something to suite them. So, on a grey Sunday afternoon my partner Jill and I set out with some friends to see two very different art experiences.

“Mirazozo” created by the Architects of Air is a luminarium style walk in sculpture. It was set up in the Station square and, from the outside, was reminiscent of a certain episode of South Park involving cats (if you’ve seen it you will know what I’m talking about). From the outside the grey domes rise up like a form of alien architecture and create an interesting feature on the skyline, but it’s not from the outside that you want to experience this. 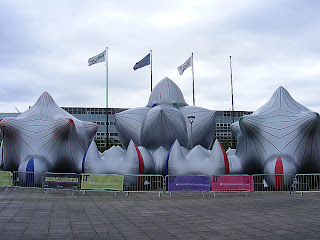 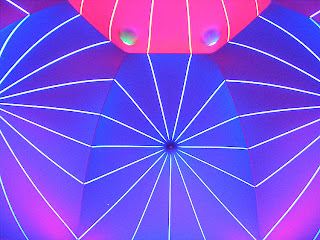 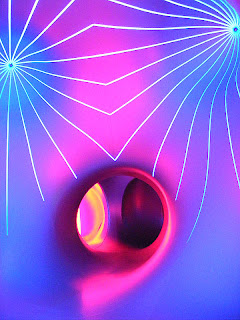 Upon entering through the air lock we were greeted by a steward who gave us some background information about Mirazozo, at this point I was pretty excited and just wanted to get inside. Everything she said went in one ear and flew out the other, I was a bit like a child in a sweet shop, but with someone blocking the door insisting on telling me the history of sweets first. Finally allowed to enter all I can say is WOW! It was incredible. I had a full sensory meltdown. The luminarium is made up of a series of small rooms and linking corridors, all through the space are small pods set back in the walls where you can sit and relax. The design is influenced by Islamic architecture. A series of straight lines formed by coloured light create geometric patterns in the upper sections of the rooms that rise up by about twenty to thirty feet in height. The real magic is the simplicity of the lighting effects created by natural light from outside penetrating thinner areas of coloured plastic and bouncing around the grey metallic walls. It’s a world of psychedelic colours that blend and bleed into one another. 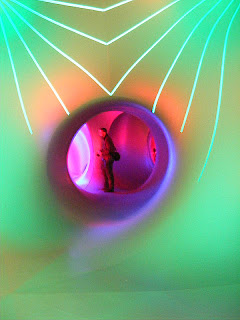 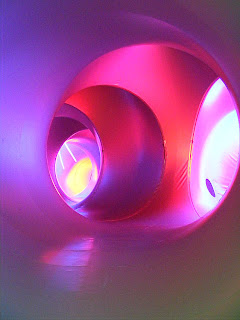 The only way I felt it could be improved was if you could make the environment zero gravity and float through the space, we have the slight problem with technology there. It was nice to slowly make my way through, absorbing the colours and then sitting in the pods and relaxing. The real world outside no longer mattered and all I wanted to do was sit there and contemplate.
This kind of work which creates an almost physical experience of colour has always been a favourite of mine and, like the James Turrell light sculptures that I have visited numerous times in previous years, this is a must see. Mirazozo lacks the intellectual depth that you get from Turrell, it could be best described as when art meets an amusement park. Visitors of all ages walked through with a look of wonder in their eyes. So, if you ever get the opportunity to see this, do it. 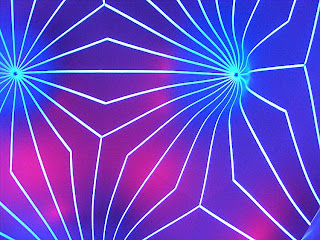 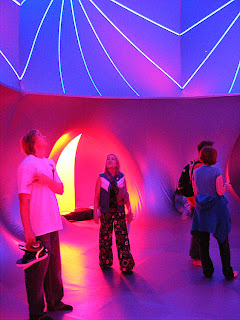 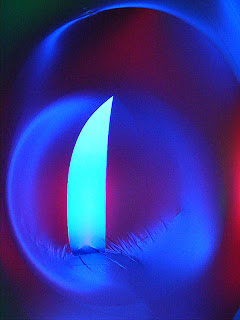 The second installation was “Asleep at the Wheel” by artist Janek Schaefer. This was situated in the empty Sainsburys store at the food hall in the Center MK. Janek is a sound artist and once resident of Milton Keynes. He has exhibited and performed across the world and has had success in the Sonic Art world, winning several awards.

The old Sainsburys store was where I used to do my weekly shopping. The store had closed years earlier and seemed strange to say the least. With all the shelves and counters removed I was surprised by the shear size of the space. The windows were all blacked out and the lights were off, this made the space seem bigger still. On one side a large circular table with armchairs set around it and TVs that you could sit and watch, listening on headphones. On the left the cigarette kiosk, the only resemblance from the old store, had its lights on and people serving hot and cold drinks. If I didn’t know I was walking into an art installation I would have thought I was at a surreal WI coffee morning. It was bizarre. The people sitting watching the tv’s seemed as if they existed outside of time, they sat taking no notice of us walking in. Maybe this was the installation? 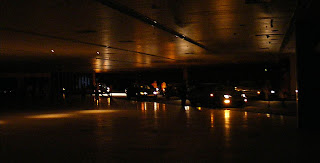 “Asleep at the wheel” is based on the theme of cars. Janek has created what he describes as a “ghost road” which cuts diagonally through the far side of the vacant store. A series of cars are randomly lined up across lanes of an artificial road, each facing in the same direction. The cars have their hazard lights flashing and this becomes the light source for the work. This dissection of the cars from where you would normally see them is very spooky, you feel as if the people who have left them have done so in an apocalyptic hurry. We the viewers are allowed to walk between all the cars and are invited to sit inside each of them. Once inside a car you feel cocooned, the front windows are frosted out as if it’s a rainy winter’s morning, the flashing hazards and silhouettes of other viewers outside become distorted and ghostly giving the experience an almost morbid feel. You are reassured by the sounds of the stereo as it plays ambient noises overlaid with people talking about technology and an optimistic hope for the future. This juxtaposition of morbid and optimistic feelings I thought was quite cleverly created by the work. 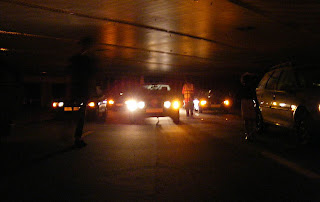 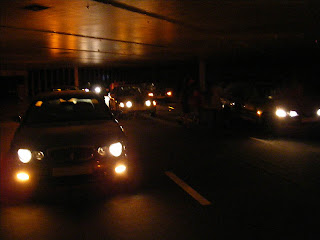 Asleep at the wheel has a deeper underlying message about green issues that it highlights in quite a subtle way. The road is a metaphor for the technological journey that our species is travelling along. We are the consumer of our planets resources and create new technologies with little understanding of what is at the end of this road. Is it going to be a hideous car crash with humans becoming extinct or will the road just go on forever. 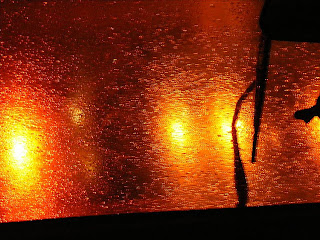 I enjoyed this journey along Janek’s ghost road. I enjoyed the interaction that we the viewer could have, this is something I would like to see more of. If art can challenge our perception of the world and use all our senses in doing so, the strength of the illusion is greater. Today I felt that both installations have done this, even if in two very different ways.
Posted by tom calnan at 09:08 1 comment:

The Fading Narrative was a two-part exhibition of work by Dan Mynard and myself. The Volte Gallery in Wolverhampton was the location of the first part of the exhibition back in April 2010, the second part followed in May at Stantonbury Gallery in Milton Keynes. I gave a presentation about the work to students of the school as part of the second exhibition. Through these talks I became aware of aspects of the work that I felt I needed to explore in more detail so I decided to write this statement to discuss my themes and goals for the project. 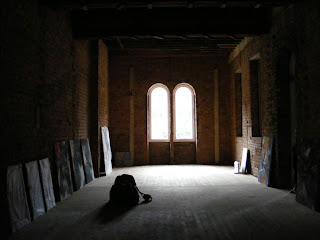 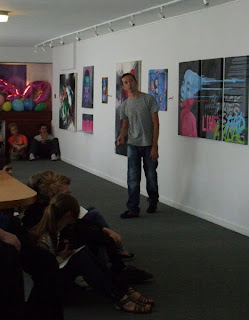 In the summer of 2009 I felt under-whelmed by my abstract work. I had spent several years looking at structural abstraction. Constantly refining and developing the processes had left me feeling like the work had become soulless and mechanical. I decided to start painting from still life, reintroducing techniques from my more formal art training. Making the work more conservative helped me to purge some of these demons. The artwork took on an autobiographical nature, I painted objects from my childhood and relevant to my childhood. I became fascinated to understand why some of these objects had taken up such an iconic role in my life. Feelings of nostalgia seemed to add to their importance. We all keep memorabilia from our past and its importance is only quantifiable to oneself. It could be an old school book, a present from a friend or even your first shoes. The point being that no matter what the object this individual value gives purpose to an otherwise redundant item. Some of the old toys I paint may out live me, they are precious, containing elements of my history, interacting and partaking in my development. We each create a living and growing archive of our existence through this memorabilia. Some are hoarded away in cardboard boxes to look at in the future so we can reminisce over our experiences. I want to recreate these items giving them a new purpose by transcending the existence that was set out for them. 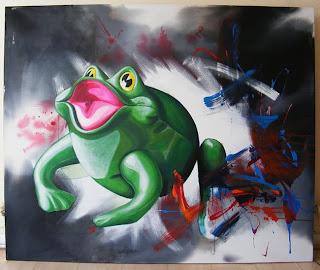 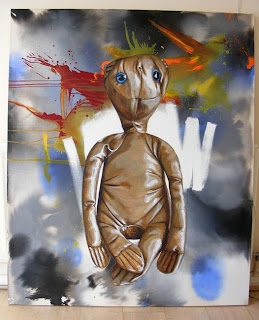 The painted surface becomes a mode of conversion for the object. The illusionary copies still create the nostalgia of the original but now each item stands independently within the abstract confine of the canvas. The paintings are roughly 115cm x 145cm, so the objects are larger than life. I like to make them appear as three-dimensional as possible but to stay playful and painterly. Creating the plastic surfaces is an important part of the painting process as it is the shiny glossy finish that links all of the objects together. 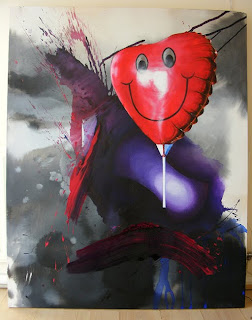 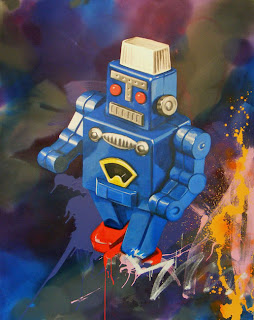 As a conclusion, the feedback I received was that most people could relate to the objects, which, even if not a part of their lives, it made them recount and remember moments and stories from their past. Through this the true power of the iconic object is revealed as it narrates stories personal to the viewer, and not just personal to myself.
Posted by tom calnan at 02:58 No comments: 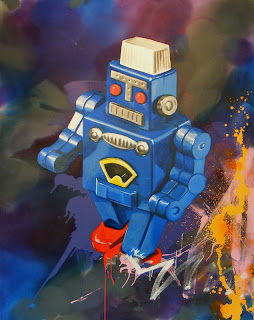 "When Robots Attack" My latest painting from "The Fading Narrative" exhibition.
115cm X 145CM, various paints on canvas.
Posted by tom calnan at 04:40 No comments:

tom calnan
I am a post graduate artist who lives and works in England.